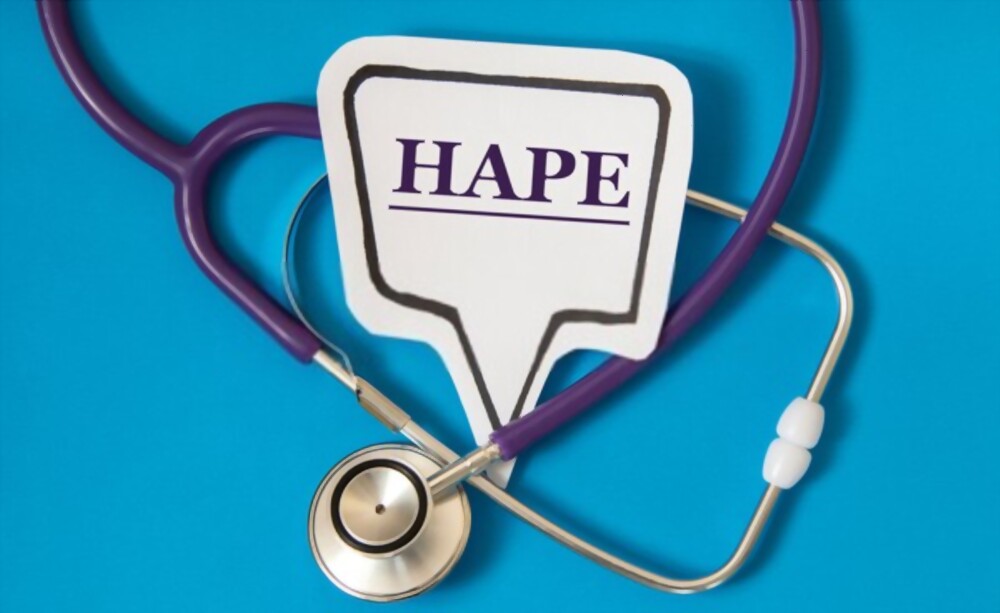 High altitude pulmonary edema (HAPE) is a life-threatening illness that can affect people who ascend to high altitudes too quickly.

It usually develops when there isn’t enough oxygen in the blood, so fluid starts leaking from the capillaries into the spaces between the lungs.

When you climb a mountain or hike at high altitudes, your body needs to adapt by increasing your heart rate and breathing rate. Your body achieves this by increasing the production of red blood cells and making more hemoglobin to carry more oxygen.

However, if you go up too fast, your body cannot adapt fast enough, and that’s when HAPE might occur.

If you have pre-existing medical conditions such as asthma or chronic obstructive pulmonary disease, your risk of developing HAPE is even greater.

The first symptoms of HAPE include shortness of breath, cough, fatigue, and fluid buildup in the lungs. If HAPE is left untreated, it can progress to swelling of the brain and death.

HAPE can also cause a cough that produces pink, frothy sputum.

This is a sign of blood in the sputum, which can be a warning sign of impending, more serious pulmonary edema.

Other symptoms of HAPE include extreme fatigue, headache, weakness in the legs, rapid heartbeat, nausea, and vomiting.

If you ascend to high altitudes too quickly, you increase your risk of developing HAPE. Make sure to ascend at a slow but steady rate. The recommended rate is 300 meters of ascent per day when climbing above 2,500 meters.

When going on a hike, take plenty of breaks. The more fit you are, the better you’ll be able to adjust to the high altitude.

If you have pre-existing medical conditions, make sure to tell your doctor so you can get advice on how to prevent HAPE. If you’re traveling to high altitudes, bring ample supplies.

Bring more than enough water, as dehydration is a common problem at high altitudes. Make sure to use sunscreen and wear a wide-brimmed hat.

Stay in a place with plenty of oxygen.

Hotels that are at high altitudes don’t provide enough oxygen, so you run the risk of developing HAPE.

If you’re going to be in a high-altitude environment, make sure to get plenty of rest.

As HAPE symptoms are similar to moderate altitude sickness, you should go down the mountain as soon as possible. If you are on a climbing expedition, inform your expedition leader and other climbers.

HAPE is treated by descending to a lower altitude to allow the fluid to reabsorb and normal function to return.

If you have HAPE, you will need to be treated in a hospital with an advanced hyperbaric chamber. This helps reabsorb the fluid and provides high levels of oxygen.

Medications for HAPE may include the following:

The diagnosis of HAPE is mainly based on the patient’s history and physical exam. Your doctor will ask questions about your symptoms and ascend to high altitudes.

They will also examine your lungs and may order blood tests to see if your levels of red blood cells and hemoglobin are normal.

If your doctor suspects HAPE, they might also order a computed tomography (CT) scan of your lungs. This is an imaging technique that uses X-rays to produce 3D pictures of the lungs.

A CT scan can help your doctor see if there is fluid buildup in the lungs.

Is there a point at which high altitude pulmonary edema becomes a concern?

Although you can develop HAPE at any elevation, there is a sweet spot at around 8,000 feet where most people start experiencing it.

The higher you go, the more likely it is that you will start feeling symptoms of HAPE. You should be particularly careful if you have a preexisting condition such as asthma or COPD.

When does high altitude pulmonary edema start to manifest symptoms?

If you descend quickly, you can usually recover within a few days. However, HAPE can progress to respiratory failure and death if left untreated.

While the symptoms will most likely go away after you descend from high altitudes, there might be some long-term effects.

For example, you might develop acute exacerbations after going to high altitudes if you have COPD.

This can be made worse by low humidity at high altitudes, which can cause more frequent infections.

When flying at high altitudes, can I develop pulmonary edema?

Yes, although it is less likely.

The air inside an airplane is not as thin when compared to high altitudes since the air pressure is much lower at the top of mountains.

However, flying at higher altitudes is still risky and can cause hypoxia, a shortage of oxygen in the bloodstream.

Furthermore, the air inside an airplane is not as thin as the air at high altitudes but thicker than at sea level. Therefore, it has a higher oxygen concentration, so passengers do not need to don oxygen masks.

In fact, if you try to put on an oxygen mask at lower altitudes, you will discover that there is almost no flow of air coming out of the mask.

Nonetheless, flying in a commercial airplane at high altitudes (around 40,000 feet) is not risk-free. The lower oxygen levels found in the air at high altitudes can be problematic for people with certain health conditions.

High altitude pulmonary edema is a life-threatening illness that can occur when there isn’t enough oxygen in the blood. It usually develops when you ascend to high altitudes too quickly.

It is best to avoid HAPE by ascending slowly at a rate of 300-500 meters per day.

Suppose you have pre-existing medical conditions such as asthma or chronic obstructive pulmonary disease. In that case, your risk of developing HAPE is even greater, so you should take extra precautions when climbing.

HAPE is treated by descending to a lower altitude to allow the fluid to reabsorb and normal function to return.